Situation of the Thai Elderly 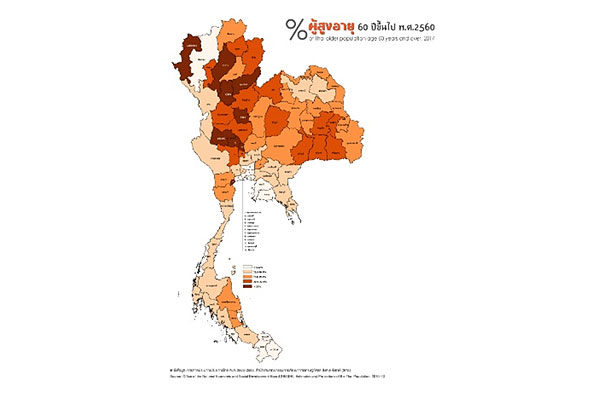 Background and Importance :
Age structure of the population in many countries are changing into more ageing society. This demographic phenomenon is a consequence of declining fertility and increased longevity. This ageing of the population is having profound effects on social and economic dimensions of many countries. In 2016, Thailand had a population 64.4 million. Of the total 9.8 million were 60 years old or older (15.2%). Hence, Thailand had reached the status of an aged society in 2005 and the elderly population is increasing at the unprecedented rate of 4% per year. Thailand will become a super aged society in year 2031 when 28% of population will be elderly.

Information from the Study :
Situation of the Thai Elderly
•   Thailand has 16% of the elderly, the second largest in ASEAN.
•   Declining fertility and increasing longevity are the main causes of ageing society.
•   The proportion of the elderly population has increased rapidly. It is estimated that the year 2019 will be the first time that the elderly population is more than the children population. – Fertility declined, in 2016 with only 704,058 new born and is likely to keep decline. Because of increasing of single people and married but not having children.
•   The average longevity is increased to 72-year old for male, 79-year old for female.
Wellbeing of Thai Elderly
•   In 2014, the elderly with income below the poverty line reached 34.3% (2,647 baht / person / month).
•   Increased in elderly people living alone, 9% live alone and 19% live with spouse.
•   Obesity in the elderly. Older women are more obese than older men.
•   The most common disease in the elderly are Arthritis and Osteoarthritis 23% and Coronary artery disease/ Myocardial infarction 5%.

Expected Results :
The government needs to urgently implement measures to accommodate this demographic change. The following are recommendations :
• Enable elderly to live in a domicile that preserved/enhances their quality of life.
• Support elderly to have secure and dignified lifestyles
• Promote good health of the elderly
• Enable elderly to have a secure and sustainable income to cover basic needs
• Produce plans to assist elderly when disaster strikes
Contact :
Institute for Population and Social Research, Mahidol University