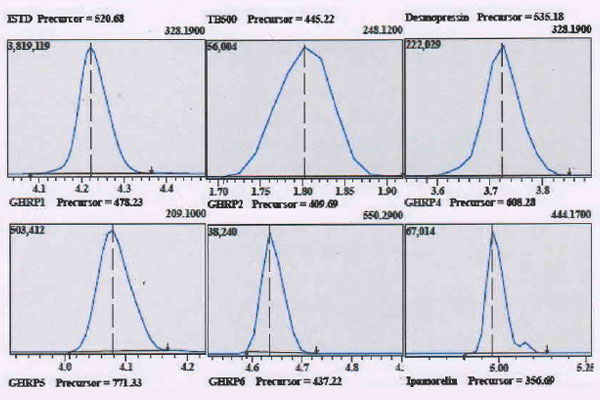 Growth hormone releasing peptides (GHRPs) are synthetic substances which stimulate growth hormone (GH) secretion and are clinically used for the treatment of GH deficiency. GHRPs and other short peptides have been included since March 2016 in World Anti-Doping Agency (WADA) Prohibited List in class S2 as they enhance athletic performance. The purpose of this work was to develop the use of LC/MS-IT-TOF for screening of GHRPs and related substances. Solid phase extraction with a weak-cation exchange (WCX) cartridge was employed for sample preparation of 11 target peptides (GHRP-1, GHRP-2, GHRP-4, GHRP-5, GHRP-6, TB500, Desmopressin, Ipamorelin, Hexarelin, Anamorelin and Alexamorelin). The combined elutions of methanol (Elution 1) and 5% formic acid in methanol (Elution 2) were evaporated under vacuum and the residue reconstituted in water: acetonitrile (90:10, v/v) mixture. Chromatographic separation and mass characterization were performed using a Hypersil Gold C18 column (50 mm, 2.1 mm, 3m) and the Shimadzu LCMS-IT-TOF mass spectrometer. Gradient elution was from 5% to 100% acetonitrile at a flow rate of 0.3 ml/min with total run time of 18 min. Method validation was performed with optimized parameters in the positive mode. The assay limit of detection was 0.2-1.0 ng/mL and the recovery ranged from 9.1 to 53.6%. The instrument precision at 2 ng/mL was 3.2-14.6% RSD. This developed method demonstrates the application of LC/MS-IT-TOF for screening of the WADA prohibited short peptides. Furthermore, modifications of the procedure can be applied for analysis of other prohibited peptides and metabolites.