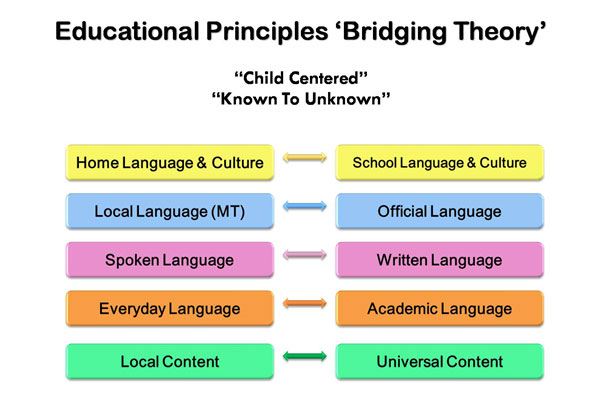 The Mother Tongue-Based Bi/Multilingual Education (MTB MLE) project has been conducted by the Resource Center for Documentation and Revitalization of Endangered Languages and Cultures, Research Institute for Languages and Cultures of Asia, Mahidol University. This project has been supported by UNICEF (Thailand), Thailand Research Fund and Mahidol University. The project focuses on building a strong foundation for native language and culture to overcome linguistic barriers and cultural differences that hinder learning progress. The program starts from kindergarten level to Grade 6. The MTB MLE students are literate in Patani Malay language based on Thai scripts, while Thai language is firstly taught orally using Total Physical Response (TPR) approach, then Thai literacy is introduced by Thai Transfer Primer. Patani Malay is used as a medium of instruction to ensure higher academic performance and a bridge to learning through Thai language. Learning of Standard Malay language using Jawi (Arabic script) and Rumi (Roman script) is introduced at higher grades to facilitate Malay studies as part of equipping students to become ready for becoming ASEAN citizens.

Notable Successes in 2015 Vital Statistic/Main Improvement/Modification: The Patani Malay-Thai MTB MLE project has been proved that it is an effective approach for developing students’ language proficiency in both their mother tongue and the national language (Thai). The approach emphasizes critical thinking, enabling the students to read and write effectively. From the external evaluations of Yala Rajabhat University, the results have shown that the academic achievement of children in the MTB MLE schools was significantly higher than that of children in the non-MTB MLE comparison schools. Furthermore, the MTB MLE students have shown signs of higher self-confidence, enabling them to communicate their opinions and ideas. This will give them a cognitive advantage when they encounter new academic challenges in the future. Mahidol University and the Southern Border Provinces Administrative Center (SBPAC) have expanded MTB MLE beyond the original four experimental schools to include 12 additional schools. It is hoped that these schools can serve as model schools for future expansion to the schools where 100% of the student body speak Patani Malay as their mother tongue.
MTB MLE expansion will only be possible if a large number of current and future teachers and administrators are trained in MTB MLE. Thus, Mahidol University is cooperating with the Faculty of Education of Yala Rajabhat University, with funding from the European Union and the Thailand Research Fund, in a project entitled, “Institutionalizing Mother Tongue Based Multilingual Education (MTB MLE) in Thailand’s Deep South”. This project aims to transfer MTB MLE knowledge from Mahidol University to Yala Rajabhat University, as a major teacher training center in the South, to enhance MTB MLE sustainability. Yala Rajabhat University is developing MTB MLE related classes for undergraduate and graduate education students, as well as continuing education for teachers and administrators. Undergraduate students in their final year of university studies will be assigned to serve as teaching interns in the MTB MLE schools. The university has also established the “MTB MLE Center” to disseminate technical knowledge to students, teachers, administrators, academics and others in the southern part of Thailand.
Future Direction :
• Sustain MTB-BE/MLE in the southern border provinces of Thailand by transferring MTB-BE/MLE concepts, principles and administration to the Ministry of Education in regular school system.
• Expand MTB-BE/MLE to the schools where students’ mother-tongue language is not Thai in border provinces of Thailand to enable increased effectiveness in educational delivery in a greater number of schools.
• Institutionalize Mother Tongue Based Multilingual Education (MTB MLE) in any other area of ethnic minority and indigenous communities.
Contact Person :
Prof. Dr. Suwilai Premsrirat
Research Institute for Languages and Cultures of Asia, Mahidol University