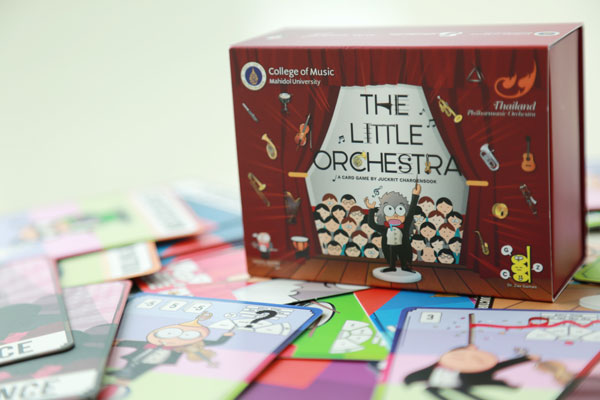 A symphony orchestra symbols regional and national excellence in culture. Many great cities and countries host world class standard symphony orchestras, including the Thailand Philharmonic Orchestra that performs 60 concerts in every season at the Prince Mahidol Hall. The orchestra is very well-received by many Thai and foreign audiences from every generations. Often, more than 2,000 music lovers can be seen in concerts of the Thailand Philharmonic Orchestra. Although many audiences had been to an orchestra concert, it is very unfortunate that many audiences know only a handful of instruments in orchestra. In a standard symphony orchestra, there are more than 30 different and unique musical instruments playing together; it is an art of musical composing, and also a fascinating topic to learn.

The project aims to support the general audience to be able to know and recognize all the important aspects of each musical instrument, including name, shape, section, type, and seating in orchestra. By knowing all the instruments and its roles in the orchestra, it will escalate the experience of listening to symphony orchestra performance beyond expectations.

Product Features :
1.) A game designed for general audiences.
2.) The game helps the player to recognize 30 different musical instruments from 4 orchestral sections (Strings, Woodwinds, Brass, and Percussions), differentiated by colors and shapes on the cards.
3.) The game teaches players the importance of conductor and types of musician that usually associated with symphony orchestra.
4.) Original cartoon characters of conductor and 10 different musician characters were created as comedic relief and to make the game relatable to younger generations.
5.) The product can be played together by 2-10 players from 4 years old and up, because the initial intension of the product was creating a game for everyone, including ones have visual deficiency (color blind).

“The Little Orchestra” was officially released on September 22, 2017, and had received praise and gained popularity from board game community in Thailand. The product had a surprisingly high demand on pre-order before its official release. The product had also been invited to many games festival, such as TK park board games club festival, and Game+Toy Lover festival. More than 20 board game cafes (a gathering place for board game lovers) across Thailand provide this product for customers to play and purchase; It has been planned that the product will be shipped globally in the near future. The product is also officially endorsed by the Thailand Philharmonic Orchestra and partnering with the orchestra to help promote both the product and the orchestra to classical music lovers.

Many local and international music institutions have been using the product as a teaching method and/or a practicing tool for both instructors and students. There are more than 10 videos featuring the product on YouTube (from both first and third parties) that had accumulated more than 100,000 views.

“The Little Orchestra” is the second product published under Dr. Zax Games; a brand created by Dr. Juckrit Charoensook based at College of Music, Mahidol University. Dr. Zax Games aims to become a leader of the alternative leaning/teaching tools [board games] in Thailand.