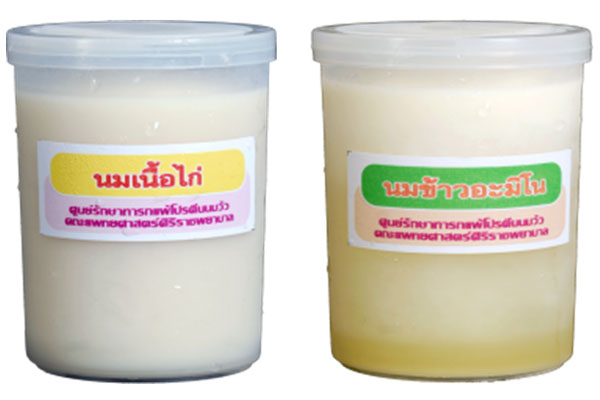 There are approximately 20,000 Thai infants and young children up to 2 years of age who are allergic to cow’s milk protein each year. In order to avoid allergic symptoms, they may need the imported commercial amino acid-based formulas for one year or longer. Such formulas are very expensive; this is economically problematic for their parents. Two modular formulas, made from chicken and amino acids with rice glucose polymer, were invented and called chicken-based formula and ricamino formula, respectively. Both innovated, less expensive formulas have been used to effectively treat more than 2,000 Thai children with cow’s milk protein allergy for 20 years. Additionally, if these formulas are commercially exported, they can bring about an economic benefit for Thailand in the long run.

However, some infants with cow’s milk protein allergy are still allergic to either the chicken-based formula or imported commercial amino acid-based formulas. This fact leads to a new idea of inventing glucose polymer from rice powder. The process starts with a 2-hour digestion of rice powder with amylase enzyme under an optimal temperature, and a removal of protein and other residuals. The resulting rice glucose polymers are in tiny molecules with less protein content. The ricamino formula is composed of all 20 amino acids, vegetable oils, rice glucose polymer, vitamins, and minerals, which are mixed together in liquid form; it is then kept frozen until being used. The ricamino formula contains complete nutrients and is well tolerated by infants with cow’s milk protein allergy. (Jirapinyo P, et al. Nutr Clin Pract. 2016;31:824-8), (Jirapinyo P, et al. Asia Pac J Clin Nutr. 2017;26(5):in press)

We look forward to developing powder form of both formulas at a large scale, manufacturing level and applying for license from the Thai Food and Drug Administration Ministry of Public Health.