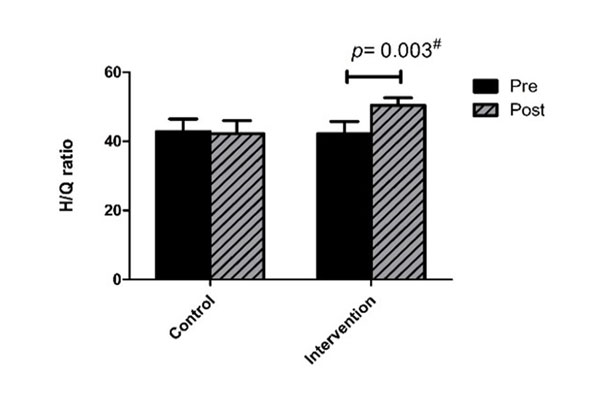 The purpose of study was to determine whether the Sports Injury Prevention Training Program (SIPTP), trained 3 times per week for 6 weeks was effective in terms of improving flexibility, isokinetic H/Q ratio, balance and muscle power which were the implication for the risk of lower extremity injuries. A total of 26 high school male basketball players, age range between 13-18 years, were randomly divided into 2 equal groups: (the intervention and the control groups). The intervention group was instructed to follow the 6 parts of the SIPTP (20 minutes), while the control group performed their regular training program. Both groups were tested with sit-and- reach test, isokinetic H/Q ratio, star excursion balance test (SEBT) and vertical jump test before and after the 6- week period. This study was a randomized controlled trial study in which two-way repeated measures ANOVA was used for analysis between and within groups, respectively. Statistical significance was considered at p< 0.05. The result showed that SEBT and flexibility value were significantly higher in intervention group than control group. Moreover, the values of SEBT, vertical jump, and H/Q ratio in the intervention group were significantly increased after 6 weeks of SIPTP. This study found that increased isokinetic H/Q ratio, SEBT and vertical jump test after 6 weeks of the SIPTP in high school male basketball players indicated that the program may help to prevent the injuries of lower extremity in young basketball players.