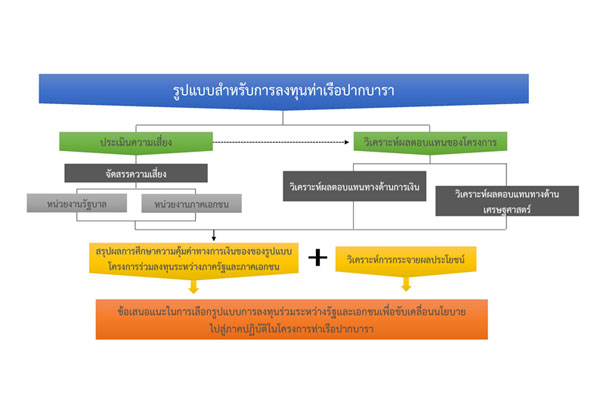 A Public-Private Partnership (PPP) can be described as a co-operation between the public and the private sector in which the government and the private sector carry out a project together on the basis of an agreed division of tasks and risks, and with each party retaining its own identity and responsibilities. This study starts with assessing the qualitative and quantitative risks (through the risk assessment matrix and stress test analysis respectively) confronting port operators of the Pak Bara Deep-sea Port project with the goal of identifying a set of principles for the equitable sharing of each risk between the public and private sector parties involved. Analytical results revealed that Build-Operate-Transfer (BOT) with Net Cost Concession was best suited to the project. Next, the study examines the extent to which PPP enhances the effective delivery of public services in the project through a comparison of public and PPP performance indicators using Value for Money (VfM) and Cost-Benefit Analysis (CBA). It was found that the flexible operating efficiency of PPP can be improved and can be better value for money (VfM) than the Public Sector Comparator (PSC) tool. Finally, the study identifies the socio-economic benefits which the scheme anticipates to deliver by Economic Internal Rate of Return (EIRR) and outlines recommendations for achieving competitive advantage by best practice considerations. In conclusion, through EIRR it was determined that the socio-economic benefits of the Pak Bara Deep-sea Port project far outweighed the costs and should be launched with self-autonomous management by private sector, fair and equitable sharing of benefits based on the economic situation, serious environmental management plans, and high technology systems for trade and logistics. In addition, engagement on the part of local people and general improvements to become a maritime hub for tourism, fisheries, and commercial activities should be encouraged.