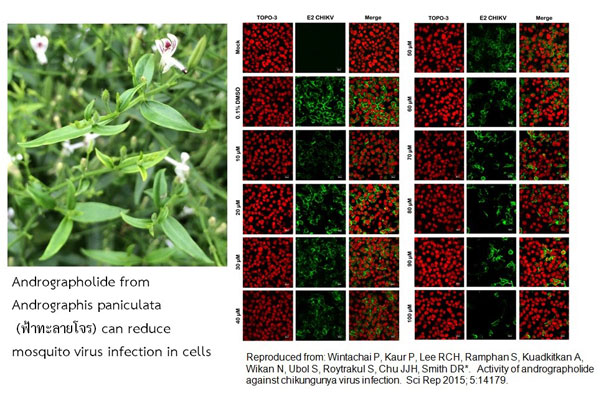 Mosquito transmitted viruses are one of the most significant causes of morbidity and mortality worldwide, particularly in under developed and developing countries. Dengue is the most significant mosquito transmitted viral disease in the world with over 100 million new infections occurring each year, and dengue is the most common cause of hospitalization of children in Southeast Asia. Despite many years of research there are no specific drugs to treat dengue infections. Other mosquito transmitted diseases of significance in Thailand include Japanese encephalitis virus, Chikungunya virus and Zika virus. Understanding the basic mechanisms by which these viruses take over host cells to facilitate their replication is an essential first step to developing specific antivirals to combat these viruses and to provide effective treatments for people in Thailand and elsewhere.

Mosquito transmitted viruses cause a significant social and economic impact and countries in tropical and sub-tropical regions, and countries such as Thailand bear the greatest economic and societal cost of these diseases, which are endemic due to the presence of the mosquito vectors. It is estimated that DENV infections alone costs Thailand some US$290 million per year in direct and indirect costs, with the disease burden estimated at 28,475 DALYs (disability-adjusted life years). In addition to suddenly emerging viruses like chikungunya virus which caused a large disease outbreak in Thailand from 2552 to 2553, other viruses are present in Thailand such as Zika virus with the potential to emerge. There are no drugs to treat any of these diseases and a single hospitalization can cause significant economic burden to even extended families. Understanding basic cellular mechanisms required for viral replication allow us to identify possible novel therapeutic targets to allow the development of cheap and effective medications for these diseases.