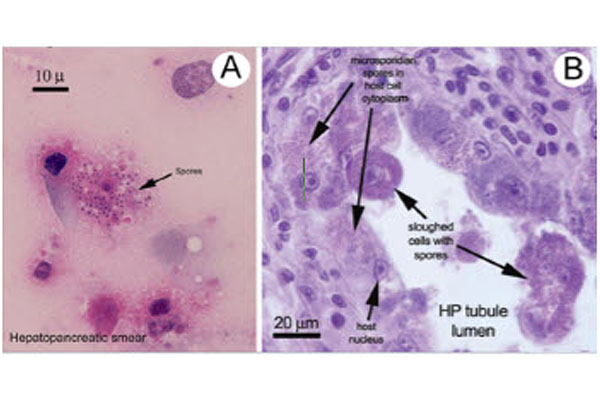 Thailand is the world 2nd largest shrimp producer. Millions of jobs generated by the shrimp industry are pivotal in supporting rural economy and alleviating poverty. However, diseases are the major yield-limiting factor in the value chain. Aquacultural researchers at Centex Shrimp, Mahidol University have developed of diagnostic tools for several key shrimp diseases with the most recent output being a detection method for a microsporidian Enterocytozoon hepatopenaei (EHP). EHP is currently the most important threat to the industry as it causes slow growth and produces environmentally resistant spores that are difficult to clear from shrimp ponds. A effective diagnostic method is, therefore, necessary for controlling the spread of the pathogen. To provide the first and best line of defense against EHP for farmers, a group of researchers at Centex Shrimp has developed a specific and sensitive detection method based on an spore wall protein (SWP) gene of EHP for screening nauplii during a pre-stocking stage and shrimp feed along with potential carriers around shrimp farms. The SWP-based method has a rate of lower false positives than the first generation EHP-detection method based on the small ribosomal subunit sequence.