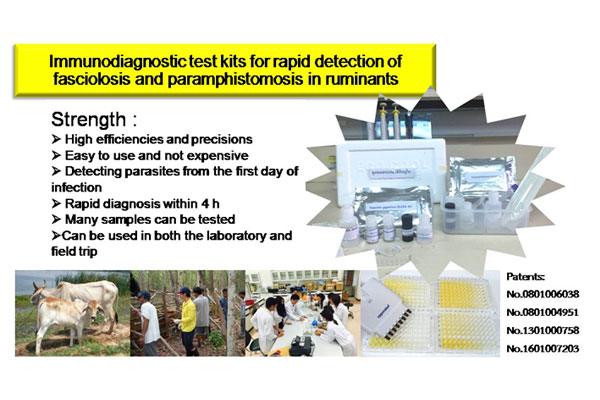 Fasciolosis (caused by Fasciola gigantica) and paramphistomosis (caused by paramphistome parasites) are the major diseases infecting domestic and economic animals, i.e. cattle, buffaloes, goats and sheep, in the tropical regions of Asia, Africa, aslo in Australia, eastern Europe and Russia, which results in major economic losses in agriculture. Moreover, liver fluke infection in humans is also recognized by the World Health Organization as a major public health problem.

The current diagnosis of fasciolosis and paramphistomosis is based on the microscopic detection of the fluke’s eggs in the feces. However, this can onl y be detected at 13 to 14 weeks after infection when the major damage to the host’s hepatic and digestive system has already occurred. Hence, antigen detection is considered to be a more reliable method for identifying animals with pre-patent or occult infection, which could not be detected by the usual parasitological test. Moreover, the antigen detection can give a more accurate current rather than past infection.

Fg-Ps ELISA Kits could be used as the important diagnostic tools not only for the rapid detection of fasciolosis and paramphistomosis but also for the seroepidemiological screening of ruminants from different regions, which in turn could contribute to the monitoring and control of the disease. Hence, the discoveries of efficient immunodiagnosis are essential for the detection, monitoring, for the early treatment with drugs, and for sustainable preventive measure from the disease.