Faculty of Environment and Resource Studies

The Sufficiency Economy: The Fundamental of the Community Development in Thailand

Mangrove Ecosystem-Sea Level-Societal Relationships in the upper Gulf of Thailand during the Holocene: Past Perspectives for Future Sea level Rise Mitigation and Adaptation 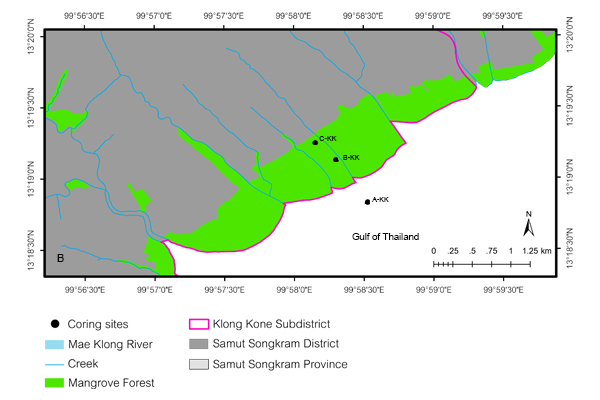 Coastal habitats, a dynamic environment of key socio-economic importance, comprise biologically diverse ecosystems including mangroves. The mangrove ecosystems, like other coastal habitats, are subjected to sea level fluctuations. In this project mangrove environments are investigated and used to unravel the last 1000-year mangrove dynamics, environmental history and anthropogenic activities of the upper Gulf of Thailand coast. A multiproxy record including pollen, charcoal, loss on ignition and particle size analysis performed on three radiocarbon dated sediment cores taken from two mangrove locations (Klong Kone, Samut Prakan and Bangkhuntien, Bangkok). The results showed that mangroves are dominated by Rhizophora in both areas that indicates these areas have been influenced by sea level from at least 1100 cal B.P. until 700 cal B.P. An intertidal area may have formed that supported mangrove development and may form a part of a palaeo-shoreline in the upper Gulf of Thailand during this period. After 700 cal B.P., mangroves decreased and were replaced by grasses suggesting a lower sea level causing mangroves to retreat seaward until around 200-100 cal B.P. Moreover, cereal pollen increased from around 700 cal B.P. suggesting probable use of the shoreline for human settlement and intensive cultivation. These mangroves were characterised by Avicennia re-colonised toward the top of the three cores, suggesting mangroves retreated landward probably due to recent sea-level rise. Human activity is recorded during the last century in both areas. In addition, the recent sea level rise rate is higher than the past maximum rate of sea level change that mangroves could withstand in the upper Gulf of Thailand. Mangroves in these areas are therefore likely to be vulnerable to sea level rise which management is needed.

Utilization from Research: The knowledge and information from the research is useful in the case of academic studies for the history of sea level change and human settlements over the last 1000 years in Upper Gulf of Thailand. In addition, the rate of sea level change that mangrove can withstand in the past can be used to provide information on the mangrove forest management in the area, which is vulnerable to the current sea level rise to related communities, organization or other agencies.