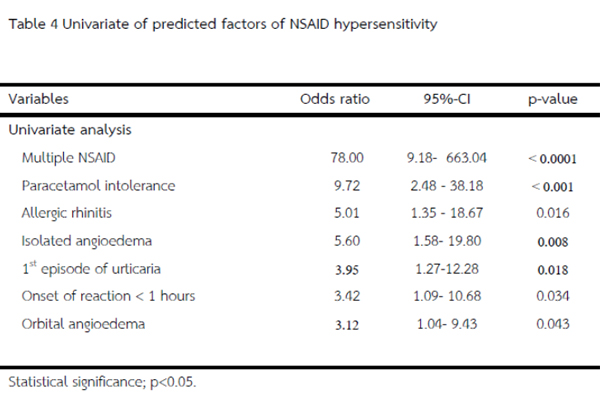 Background : Non-Steroidal Anti-inflammatory Drug (NSAID) is one of the most common drug hypersensitivity (DHR). Main mechanism is NSAID cross-reactivity and the manifestation varies among different ethnics. Drug provocation tests is considered the ‘gold standard’ diagnostic tool, but in some countries which cannot performed DPT due to lack of allergist. If we able to clarify the predictors of NSAID hypersensitivity, it benefit for non-allergist for further most appropriated NSAID use.

Objective : To evaluate clinical characteristics and the factors that predict true NSAID hypersensitivity.

Material and Methods : Retrospective study of 80 patients with suspected NSAID hypersensitivity at Allergy Immunology and Rheumatology (AIR) unit, Ramathibodi hospital, Mahidol university, from Jan 2012 to Dec 2016,Questionnaire according to European Network for Drug allergy (ENDA) and drug provocation test (DPT) results were reviewed. All patients were asked to complete allergy questionnaire. If any respiratory symptom presented, SPT or sIgE for common aeroallergen were performed. Definite NSAID hypersensitivity were either cutaneous reaction from ≥ 3 NSAIDs or positive DPT. Predictors of NSAID hypersensitivity by comparison between definite group and negative DPT group were evaluated.