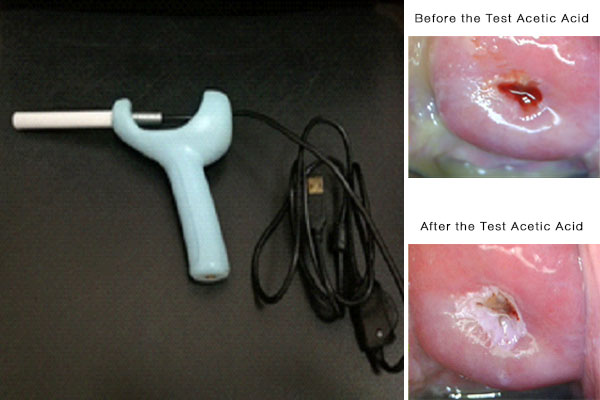 Cervical cancer is still the most common gynecologic cancer in developing countries even the various screening methods have worldwide used and proved to be beneficial to reduce the incidence of this cancer, such as Pap test, human papilloma virus (HPV) DNA testing, and visual inspection after acetic acid (VIA). However, the incidence of cervical cancer in Thailand reported by GLOBOCAN 2012 was 17.8/ 100,000 women/year, which is not reduced. Contrary, its incidence is slightly increased from year 2008.

The common causes of these are living in rural area and long distance to service providers, scarcity of cytotechnicians and cytologists, expensiveness of some tests such as HPV DNA test and lacking of personal awareness. We try to solve this problem by invented inexpensive simple tool for cervicography, named “Siriraj Portable Digital Cervicoscopy”. This device can be used as an alternative method for cervical cancer screening, its function has similarity to VIA, nevertheless, it has higher magnification (4-15 times) and the cervical lesions can be recorded by this device to review later. It made from USB- pen camera which can connect with smart phone to record both photos and VDO-files for further consultation with the specialist especially in the difficult cases.

The Expected Results : The benefits of this device are user-friendly, inexpensive, no waiting time for the screening results, used less process than Pap test, can be done in the area that has no cyto-technicians or cytologists and can be used by physicians and other trained medical personals. However, its need some skill in interpretation of the cervical lesions according to modified colposcopy index. After the successful implementation of program especially in the rural area of Thailand, Thai women will have more choices for cervical cancer screening and also can be done as one stop service, screening with promptly treatment. The new cervical cancer cases would be reduced in near future and reduce the cost burden of this cancer for our country.