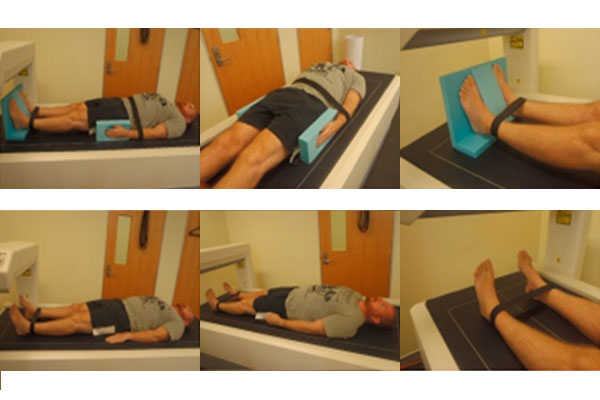 Dual-energy X-ray absorptiometry (DXA) is an accepted time-efficient method of body composition assessment for total body and regional fat mass (FM), lean mass (LM), and bone mineral content (BMC), but for longitudinal monitoring the measurements must be sufficiently reliable. The aim of this study was to compare the reliability of a new positioning protocol (Nana et al) with the current reference (National Health and Nutrition Examination Survey [NHANES]) protocol and investigate their within-protocol precision. Thirty healthy adults (16 females and 14 males) underwent 4 whole-body DXA scans in succession with full repositioning between scans. The scan order was randomized, with 2 scans undertaken in accordance with the current NHANES protocol and 2 using the Nana et al protocol. Magnitudes of typical errors of measurement and changes in the mean of DXA body composition estimates were assessed as standardized effect sizes. The Nana et al protocol repositioning produced trivial typical errors for total body across all LM estimates except for FM in the arms and trunk which were moderately substantial. The NHANES protocol produced similar typical errors for all measurements in LM except for FM and BMC in the trunk and arms which were substantially larger than the smallest worthwhile effect. The difference between protocols produced substantially large typical errors in estimations of both total body FM and regional FM and BMC, but differences in LM were all less than the smallest worthwhile effect. Although both protocols demonstrated acceptable intratest reliability, the Nana et al protocol produced enhanced precision in regional (arms and trunk) FM and BMC. The protocols were substantially different in body composition assessment especially for FM and thus should not to be interchanged. Anecdotally, subjects felt more comfortable and supported during the scan with the Nana et al protocol.